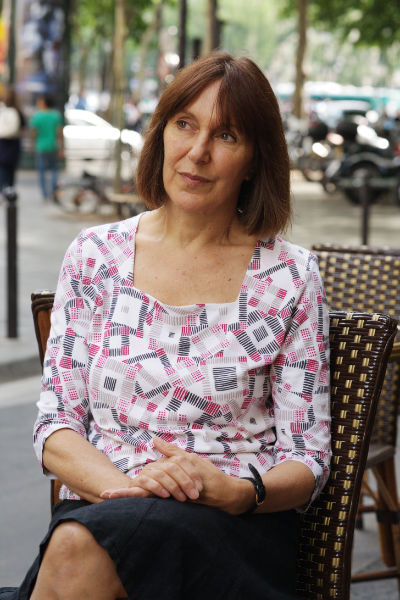 When my parents were six in 1917, the Tsarist state, with its sumptuous and barbaric civilisation based on religion and autocracy, collapsed; revolution and civil war followed, and in 1922 the USSR was born. In 1991, five years before my father’s death and ten years before my mother’s, the USSR collapsed. Thus almost the whole of their adult lives was encompassed by a society which its founders believed to be the best humankind could aspire to – secular, based on ideals of social justice and equality, with the population’s needs provided for and underpinned by the state. In other words, a new kind of civilized society. But before and after all this there is civil society, that sometimes erratic network of human-to-human bonds underpinned by human fellow-feeling that seems to bubble up independently of the state.

In 2005 my daughter and I travelled to Ukraine to discover ‘our roots’. My cousin Andriy met us at Kiev Borispol airport in his antique BMW and we set out on a road trip through this fragment of the former Soviet Union, now the Ukrainian state, which struggled to fulfil  even the basic functions of a civilised society that the Soviet Union had formerly delivered, including law and order, regulation, culture, education, health care and pensions, infrastructure, public transport, policing of a kind – plus the occasional gulag.

We started out from Kiev on the morning of a fine autumn day, the trees a golden-leaved cascade tumbling down the steep banks towards the silver Dnieper. Most visitors to Ukraine, in search of the monuments of civilisation, never get beyond Kiev with its fine onion-domed churches, or the picturesque formerly Polish town of Lvov in the west. But our destination was Luhansk in the eastern industrial rustbelt of Ukraine where tourists never go, and our road trip was also a journey through the past, through the heart of the vast little known rural hinterland of Ukraine. This is a journey that would be impossible today. This pastoral region has become a war zone and my cousin Andriy who was my driver and companion has become a refugee in his own country. Recalling our road trip together has a particular poignancy now.

Andriy was in a glum mood as we set out; his Cossack-style moustache drooped as he informed us that the starter motor of his seventeen-year-old BMW was playing up and we had eight hundred kilometres to go. But at least the CD player was working, and Stella Zubkova was warbling songs of love and yearning as we crawled eastwards bumper to bumper on the traffic-choked Poltava highway.

Foot on gas, thumb on horn, Andriy kept up a running commentary, waving one hand in the air to illustrate his points. Sometimes, for a particularly complicated point, he had to use both hands. Each time we overtook another vehicle, Andriy triumphed. ‘There they go, those fool Byelorussians in their stinky Lada – Lukashenko! Ha ha ha! There go the insolent Russians in their mafia Volga – Putin Schmutin! Bye bye! – There go those Franczooski in their showy Peugot 406 – Au revoir! Bye bye!   See! Seventeen year-old Beyemvey beats all!’ Yes, our old BMW bounded along the pitted Soviet-era tarmac at 140km per hour. It’s at times like this you’re glad to be Vorsprung durch technik.

Through the open roof, the sun poured in and songs poured out.  Stella Zubkova’s voice throbbed with passion. ‘Ha! Now who is this idiot trying to overtake us?’ A tank-like land-cruiser with darkened windows glided by. Andriy accelerated briefly, then pulled back and shook his head. ‘Go, fool! Go! Biznessmyen!’ I smiled weakly and hung onto my seatbelt. Andriy thinks seatbelts are for ninnies.

The countryside we drove through was lush, drowsy, stuck in a time-warp.  Old people with time on their hands and no pensions sat behind roadside stalls selling apples, pears, berries and cherries, freshwater fish, plastic buckets, bits of dead Ladas and mysterious cloudy fluids in plastic bottles. As we sped by, Andriy greeted them all.  Beep! beep! beep! We passed wooden cottages surrounded by hollyhocks, and willow-fringed streams where sun-burned kids splashed about in their knickers. We passed dozy cows sleeping off their lunch in the long grass, we passed a hay wain straight out of Constable, and a child wobbling behind it on a bicycle. Beebeeep!

We stopped in a village with a market, where people from the surrounding countryside had brought their produce to sell. I have got so used to the uniform pre-packed supermarket apples and tomatoes of civilisation that at first these seemed misshapen and too full of life – literally. A small maggot poked its head out of a blush-red apple, looked around, then disappeared again. Andriy bought a kilo. ‘Better taste’, he said.

Some miles west of Luhansk, following a hand-painted wooden sign, we veered off the main road again and took a track that meandered between wide fields of sunflowers and wheat, past groves of chestnut trees,  suddenly opening out into a make-shift parking area where an assortment of antique Ladas was parked up alongside a vintage tourist bus bedecked with faded plastic flowers, Ukrainian flags, Orthodox crosses and images of saints. Andriy pulled up proudly between a rusty Soviet-era Zaporozhets car and a camouflage-green-painted motorbike with a sidecar, possibly a war relic. His BMW definitely put all the other vehicles to shame.

A footpath led along the edge of the field down into a woody hollow where a crowd of people were gathered beside a stream with their heads bowed and there was a low murmuring sound half way between humming and chanting.

‘They are praying for a miracle’, he said.

A moment later a black-robed priest stepped into view carrying a blue plastic bucket and a washing up brush. As we watched, he dipped the brush into the bucket and splashed water over the onlookers, including us.

‘Holy water’, whispered Andriy as I backed away, ‘Look, the water comes out of the rocks. It never goes dry’.

I looked where he pointed. Below the trees was a cave where water burst out between the rocks and trickled down into a clear stream that wound away into the wood. I glanced at the people beside us noticing a man on our left with a horribly weeping eye; the emaciated old lady beside him had hands twisted with arthritis; another man had a stump for a leg; several people were on crutches. A little boy with Down’s syndrome held the hands of his parents. A girl in a wheelchair was pushed forward to receive an extra drenching. My secular heart contracted with pity. In a country without a functional health service, they had to make do with a priest with a plastic bucket and a washing up brush.

I felt a moment of gratitude remembering my clean, efficient, if somewhat over-crowded, local hospital back home. This display of hopelessness and credulity made me depressed, but my cousin filled a plastic bottle at the source to take home some holy water for his mother, my aunty, who was in her eighty-ninth year, and feeling all the usual aches and pains of old age.

We made our way back to the car and Andriy turned the ignition key. Nothing happened. Uh oh! He tried again, and again and again. Still nothing. A kindly Lada driver tried to help us with jump leads, but to no avail. The war-relic motorcyclist saluted us with a gauntleted hand and roared away, a pair of crutches poking out from his side car.  Dusk was drawing in and the car park around us was gradually emptying as the faithful, healed or not, headed off home for their beetroot soup and sour-cream dumplings. Feeling hungry and emotional, we munched on wormy apples as we contemplated our possibilities. At last, only the Zaporozhets and our BMW were left in the car park.

‘We need a miracle’, said Andriy.

I was all for tipping the whole bottle of holy water into the radiator, but Andriy demurred. While we were arguing, a whiskery young man wearing a leather jacket and carrying a holdall and a blue bucket climbed the footpath from the spring and made his way over to the Zaporozhets. As we greeted him, we recognized the priest who an hour ago had splashed us with holy water.

‘Can you help us?’ Andriy asked.

The young priest rolled up his sleeves and got under the bonnet. His face was shiny with optimism, but the German-made BMW was too civilised and too complex durch technik. Still, there is a time-tested fix for all such problems. He opened up his boot and pulled out a coil of heavy-duty rope with which he attached the bumper of the BMW to the Zaporozhets. Andriy took the wheel of the BMW, I sat beside the young man in the Zaporozhets, and we took off with a lurch. It seemed incredible, but this battered two-stroke Soviet car was actually pulling a BMW along a track between the sunflowers. Civility was giving civilisation a tow.

The priest was charming, educated, serene despite the burden of suffering he dealt with on a daily basis. He told me that this place, Kiseleva Beam, had been a shrine since the eighteenth century, when a boy was cured of blindness by these waters and a vision of the Holy Virgin appeared among the twisted tree roots above the spring. Holy water plays an important role in the spirituality of the Orthodox Church, he explained, and thousands of people come here every year to be healed. It is a privilege to serve them, he said.

As we turned off the field track onto the main road and picked up a bit of speed, there was a sudden jolt on the rope behind us and a loud insistent beeping from Andriy. We pulled over and went to see what was happening. And before Andriy could even wind down his window with a joyful grin, we could hear that the old BMW was back in business. Civility had tow-started civilisation.

‘See!’ said Andriy, keeping his foot on the gas as the priest uncoupled the rope, ‘It is a miracle!’